The world turned upside down

The world turned upside down

In 1781, when the British surrendered Yorktown and laid down their arms at the feet of the French and American armies, the British band played the song “The World Turned Upside Down.” After, the Brexit, Trump and now the recent British election, this could be an appropriate anthem for current day politics. 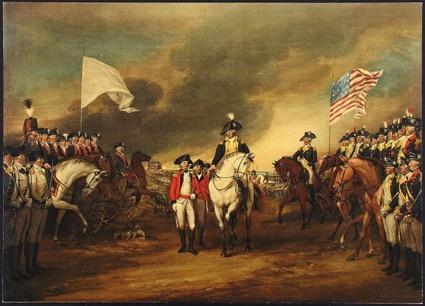 In fact, Teresa May could well be playing the tune in Number 10 as she sips at the leftovers of last night’s whisky and slowly tortures her advisers.

So, we have a hung Parliament, when no one party has enough MPs to form a majority on its own, as was the case in 2010 when the Conservatives ended up joining with the Liberal Democrats to form a coalition government.

May and Corbyn are the leaders with the most support and therefore with the opportunity to form a government and become prime minister. They could choose to run a minority government and try to negotiate their way through every time they need to pass legislation, but the preferred option is to agree with another party or group of parties to form a coalition government and achieve that majority of 326 seats out of a total of 650.

The first deadline for achieving this majority is 13th June, and in 2010 it took Cameron 5 days. On 19th June the government will be seeking to pass its programme of proposed new legislation in the Queen’s Speech. This government could be the Conservatives or Labour depending on whether May resigns or not. 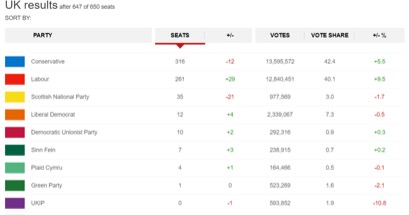 This is doubtful. Looking at the figures above, taken from the BBC; the most attractive option for Teresa is to side with the Northern Irish DUP. The newspaper the Mirror describes the DUP as follows: “The Democratic Unionist Party are the anti-abortion pro Brexit party of climate change deniers who don’t believe in LGBT rights who Theresa May needs to prop up her failing government.” They are pro Brexit but pro “soft” Brexit because they don’t want a hard border with the Irish Republic and want ease of trade throughout Europe.

Meanwhile, the SNP with their nationalist objectives and the Liberal Democrats with their anti-Brexit stance are not an option.

Last night, while at a Conservative event watching the election unfold in an Irish pub in Madrid, four Labour supporters asked if they could join us. Of course, we said. Then watching the college students running with the ballot boxes through school gymnasiums throughout the country, from Newcastle to Falmouth, from Cardiff to Edinburgh, it was difficult not to feel a certain pride for being British.

One only hopes that the MPs can stand up to the challenge, and deliver to the British people what they deserve; brave and wise leadership, in a troubled world.

When asked what would be the biggest problem in Europe in the years to come, Margaret Thatcher simply replied, “A lack of leadership.” Looking at UK and European politics her words seem to ring true, but as history has shown time and time again, leaders tend to emerge and come to the fore in challenging times; and as it was for Cornwallis in Yorktown, the times are certainly getting more and more challenging. 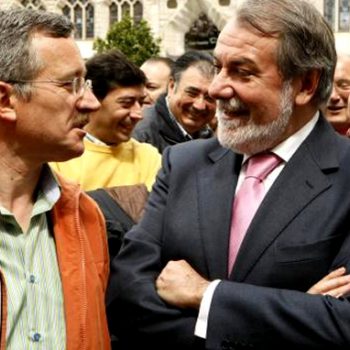